On this day three years ago, the Westchester Knicks were officially founded as the 18th franchise in the NBA Development League. Since that time, the pages of Westchester Knicks history have started to write themselves. History is a series of shared experiences between a franchise and its fans. This bond is the center of the many shining highlights that have transpired over these past three seasons. As we reflect on the past together, we forge the future of the Westchester Knicks.

Westchester County has one of the most illustrious histories in this country, but on March 10, 2014, the county received something that it had never had before. That memorable day in March gave Westchester its first professional sports franchise, the Westchester Knicks. At the time of the announcement, a name had not yet been declared. After a name-the-team contest, fans chose to maintain the Knickerbocker name, while also adopting the orange, white, and blue color scheme of the New York Knicks. On May 14, 2014, Westchester County Executive Rob Astorino unveiled the name and color scheme. Hence, the Westchester Knicks were born.

We are very excited to announce that we are officially the #WestchesterKnicks! pic.twitter.com/f8Y90bv142

The Westchester County Center has been the home of the Knicks since the beginning. On November 19, 2014, the doors to the County Center opened for its first home Westchester Knicks game. Westchester played in front of a sold out crowd against the Canton Charge. The Knicks were denied a victory in its first home game, but bounced back two days later, defeating the Grand Rapids Drive 97-83. The win over the Drive marked the first official win in franchise history.

The First Call Up: Langston Galloway

Star players are critical to helping a new franchise blossom and take root. Langston Galloway quickly became the face of the Westchester Knicks in its first season. His intelligence on the floor, as well as his consistent body of work, did not go unnoticed. On January 7, 2015, Galloway became Westchester’s first player to receive an NBA Call-Up as the New York Knicks offered Galloway a 10-day contract. Galloway impressed so much at the NBA level that New York signed him to a partially guaranteed two-year deal after his second 10-day contract. He has continued to maintain a successful NBA career since that unforgettable day. that changed his life forever. Through his 19 games with Westchester, Galloway averaged 16.5 points, 5.9 rebounds, 2.4 assists, and 2.7 steals over 36.8 minutes. He is currently playing with the Sacramento Kings.

Langston Galloway has become the first call-up in #DubKnicks history after signing a 10 day contract with the @nyknicks. #HoopDreams coming true. @nbadleague

One of the primary functions of an NBA D-League team is to serve as a platform for an affiliate to send its players on assignment to stay sharp, get extra reps, and play minutes they might not otherwise be getting at the NBA level. This harmonious relationship has been a core building block between the Westchester Knicks and the New York Knicks. On January 30, 2015, Cleanthony Early became the first player from the New York Knicks to be sent on assignment to Westchester. Early played in three games at the County Center during the 2014-15 season, averaging 20.3 points and 9.7 rebounds during that span.

Cleanthony Early has been assigned to the @wcknicks, becoming the first NBA Assignment in Westchester Knicks history. pic.twitter.com/XnuDLfrU32

On June 26, 2014, Thanasis Antetokounmpo was selected by the New York Knicks with the 51st overall pick in the 2014 NBA Draft. After playing with the Knicks’ summer league team, Antetokounmpo was acquired by Westchester for its inaugural season as a draft-rights player. His name soon became synonymous with high flying dunks and jaw dropping blocks at the rim. On Sunday February 15, 2015, Antetokounmpo represented the Westchester Knicks in the NBA D-League Dunk Contest, finishing in second place. In his 47 games of action that opening year, he averaged 13.9 points, 6.2 rebounds, 1.7 steals, and 1.7 blocks per game. Antetokounmpo was named to the NBA D-League All-Defensive second team at the end of the season.

Changing of The Guard

On October 6, 2015, the Westchester Knicks hired Mike Miller as the head coach for the 2015-16 season. It didn’t take long for all of Westchester to see that Miller was the right man for the job. Under his direction, the Knicks went 6-0 in the opening month of the season. Miller was named Coach of the Month for November after his team’s outstanding start while Westchester also reached the playoffs in its first season with Miller at the helm. He led the team to the fourth-best record in the Eastern Conference, with an overall record of 28-22. 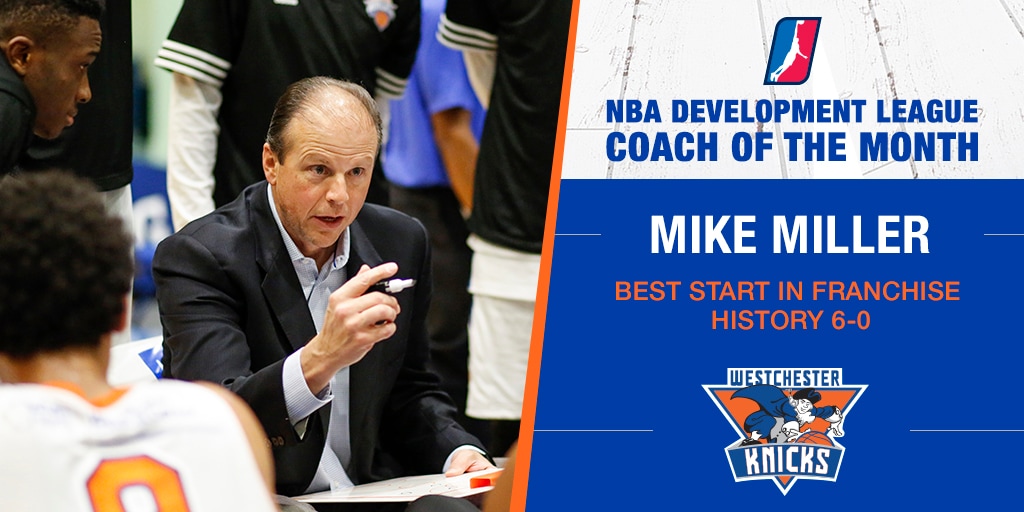 Cashing in on the Draft

The start of the season really begins on draft night. On October 31, 2015, the Knicks used the second pick in the NBA D-League draft to select Jimmer Fredette. The “Jimmer” was already a household name among basketball fans for his captivating offensive acumen that he displayed while playing for Brigham Young University. Fredette emerged as one of the best players in the entire league during the 2015-16 season. It was easy to get swept up in Jimmer Mania, but Westchester also walked out of its draft with two other vitally important players. The Knicks selected Kevin Capers with the 19th pick of the third round, and Jordon Crawford with the second pick of the fifth round. Both players afforded the team a tremendous level of depth. Crawford appeared in 47 games in the Knicks’ second season with Capers right behind, appearing in 35 games.

During the 2015-16 season Jimmer Fredette maintained the eighth-highest scoring average in the league with 21.1 points per game. Fredette was on the fast track to the D-League All-Star game, and once he was there, he showed the world what kind of player he was. In the game, Jimmer recorded a stat line of 35 points, six rebounds, and eight assists, leading the East All-Star team to a 128-124 win over the West. He was awarded the All-Star Game MVP trophy for his prolific performance. Fredette wasn’t the only Knicks player to see action during the game as center Jordan Bachynski also suited up for the East, scoring 10 points, grabbing two boards, and recording one block.

Everyone wanted a piece of Jimmer Fredette during the 2015-16 campaign. Before he was even able to suit up for Westchester, the New Orleans Pelicans came knocking at Fredette’s door. On November 10, 2015, he became the second player in Westchester Knicks history to receive an NBA Call-Up. Nine days later, the Pelicans waived Fredette, and on November 28, 2015, returned to the Westchester Knicks. In his first game back with Westchester, Fredette scored 37 points and eight assists in a team win over the Grand Rapids Drive. That triumphant return was the launching point to an incredibly successful season. On February 22, 2016, Jimmer Fredette signed a 10-day contract with the New York Knicks. After the duration of the contract ended, he was right back in Westchester, helping the team make its push to the playoffs. At the end of the season, Fredette was named to the All-NBA D-League Second Team.

That moment when you sign with the team you grew up rooting for. #Knicks

Thanasis Antetokounmpo Gets the Call

On January 29, 2017, the New York Knicks offered a 10-day contract to Thanasis Antetokounmpo, making him the third player in Westchester Knicks history to receive an NBA Call-Up. At the time of the announcement, Antetokounmpo appeared in 74 games for Westchester, averaging 12.1 points, 5.3 rebounds, and 1.5 assists over 30.4 minutes per game. He appeared in an additional 17 games for the Westchester Knicks after his 10-day contract expired.

Playoff-Bound for the First Time

All of the highlights from the Knicks’ second season culminated in its first playoff appearance in franchise history. At the end of the 2015-16 regular season, Westchester held an overall record of 28-22, securing the fourth seed in the Eastern Conference playoffs. The Knicks fell in two games to the first-seeded (and ultimate champion) Sioux Falls Skyforce, but that did not detract from what turned into a remarkably successful campaign in the team’s second season. Jimmer Fredette led Westchester in scoring during both playoff games, scoring a combined 46 points in the two matchups.

CLINCHED! Playoffs-bound for the first time in franchise history! #GoDubKnicks!

The County Center Gets a Facelift

The Westchester County Center is a unique building with history permeating from every corner. The Westchester Knicks added upon that history upon its inception, and heading into its third season, took the experience inside the building to another level. During the offseason, a brand new court floor was added, as well as an LED ribbon that wraps around the entire arena. New courtside seats and high-definition video boards were also added, giving fans the ultimate game-day experience.

Just wait til you see it in person.

Westchester started its third season by winning six of its first seven games. A major force was developing through that strong start: enter Chasson Randle. Like Jimmer Fredette had done the season before, Randle proved he could handle the responsibility of leading a team with an explosive style of play. Through 19 games with Westchester, Randle averaged 20.7 points, 3.6 rebounds, and 3.3 assists over 32.1 minutes. His star-studded stats could not keep the NBA teams from calling. On January 10, 2017, Randle received an NBA call-up from the Philadelphia 76ers, becoming the fourth player in Westchester Knicks history to receive the honor. After earning two 10-day contracts, Randle signed a three-year deal with the 76ers. Philadelphia was subsequently forced to waive him in order to pull off a trade.

The @Sixers have signed guard @ChassonRandle to a 10-day contract, making Randle the 4th player in team history to sign with an @NBA team. pic.twitter.com/1nj8Dixpnh

Upon his release, Randle was back in orange and signed with the New York Knicks. On March 6, 2017, Chasson Randle made his debut against the Orlando Magic. He scored seven points, grabbed five rebounds, and dished out five assists over 26 minutes, helping lead the Knicks to a 113-105 win over the magic.

Three assignees from the New York Knicks have emerged as fixtures for Westchester this season. Marshall Plumlee, Maurice Ndour, and Ron Baker all appeared in a combined 29 games while on assignment. Plumlee has always seized the moment, averaging 12.6 points and 8.9 rebounds in his action with Westchester. Maurice Ndour has never been far behind, with an average of 14.3 points and 6.7 rebounds. Ron Baker has been such a mainstay in the New York Knicks lineup this season that he has only appeared in four games for Westchester. Regardless of that, Baker still made the most of every opportunity he had while playing in front of the Westchester faithful at the County Center. He has averaged 12.5 points, 7.0 assists, and 5.3 rebounds in his four games with the Westchester Knicks.

Westchester has been on a remarkable journey throughout just the past three years. Memories are created with each passing day, and there are plenty more that will become easily recognizable as time passes on. The highlights of every moment is a testament to the unique relationship between the Westchester Knicks and its fans. And this is only the beginning.